My proof of concept system turned out great.  I demonstrated to myself, at least, that I could bring in more channels than I could possibly want with an inexpensive antenna literally laid on a bed connected to a TV in an upstairs bedroom.  My signal from ABC, CBS, Fox, NBC, PBS, UPN & others was crystal clear in this configuration.

Still, there are some potentially interesting hurdles to overcome to actually have an OTA system that would make me comfortable with becoming a cord cutter.  Chief amount them:
I have opted to address the first two questions by building a prototype system that can exercise the key elements of those issues.

Our house, built around the turn of the century (this one, not the last one) has quite a few cable bundles run through the walls and attic connecting all of the rooms to an unfinished area of the basement known to us as the wire room. When we moved in a few years ago, I had to redo many of the network cable connections to get them to work properly — the builder didn’t do a very good job with low voltage connections.  This leaves me skeptical of any existing connection until I have tested them; for that matter, are there actually cables running where I need them to go?

What are the parts that need to be proven?

I think my final solution would have an antenna in the attic possibly with an amplifier connected over an existing coax to the wire room.  The signal would then be carried to room where I want to have a TV and a TiVo to record shows and feed them elsewhere in the house.  The TiVo would connect to the rest of the house over my proven ethernet system.

This raises two major questions:
I’ll consider those in the following sections.

Before moving to build the prototype, I headed into the attic to see if cables are accessible and if I have a place to situate the antenna.  Our place has relatively large trusses and loads of blown insulation pilled high in the attic.

Fortunately, some cables are visible in a few places which gave me a start on where to dig.  After only a couple of minutes, I found two bundles that had been opened and coax connections spliced into them.  I have no idea why the splices are there, but they provide easy access to cables that likely run to the wire room and that I can use since nothing in my house currently uses the existing coax cable infrastructure.

As I mentioned, the trusses that support the roof are large with unusually large open spaces.  These spaces offer plenty of places an antenna can be hung without interference and pointed in any direction.

The final thing I checked was the availability of 120V power for an amplifier, should it be needed.  I found two boxes with available outlets in easy reach of the cable splices that I suspect that I will use.

That all looks good the necessary elements are all in place in the attic, but it is harder to work in the attic than other areas of the house and I want to be certain my approach will work before playing in the insulation.  Satisfied an attic installation would work, if I could make everything else work, I stopped the attic work and returned to building a prototype in more finished areas. 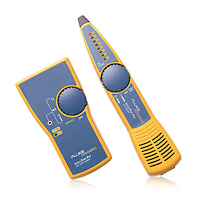 The wire room in my house contains one end of more than a couple dozen coax cables that run all over the place.  To make this work, I have to find a coax between the space contains my antenna (spare bedroom for the prototype) and the wire room.  I also need a coax from the wire room to the location(s) of my anticipated TV tuner and perhaps other devices.

The big hurdle to using my existing coax cables is always determining which cable goes where I need it.  Conveniently I have a Fluke cable toner in my shop.  This critter is not cheap, about $200, but this type of tool is incredibly useful in finding the right coax or other low voltage wire.

After some detective work, I found cables that ran where I wanted.  I needed to re-terminate one of them which wasn’t installed correctly by the builder, but otherwise this was surprisingly easy giving me confidence that I can find the right cables.

Is TiVo viable for my hypothetical setup?

My family have been TiVo users pretty much since there have been TiVos. I am hooked on time shifting, commercial skipping and other handy features that TiVo gives me, as such, I really  want TiVo in any video system that I use.

Unfortunately, the big fancy TiVo that is the hub of my cable bound system, a TiVo Roamio Pro that can tune six cable sources is absolutely useless trying to bring in an OTA source.

Fortunately, I had a TiVo Premier XL sitting on a dresser (circa 2010), which has been serving as additional storage space.  This bad boy can tune four cable sources and has a coax input labeled antenna, so I set this up connected to my antenna through the house cable system to demonstrate viability in my environment.

After a bit more internet sleuthing, I learned that the Premier XL had lost the ability to tune OTA sources when TiVo added the XL suffix and the ability to tune 4 cable sources.  Curiously, they left a vestigial coax connection labeled “antenna” which does absolutely nothing.

Delayed, but undefeated, I visited my electronics boneyard to see if I had anything that might serve as a demo platform.  I found a TiVo Series 3 first used in 2007 that sported a coax connection labeled Antenna.  This seemed promising, it was old enough to be from the era of declining but still significant OTA usage. Worryingly, it predates the digital/analog broadcasting switch so it might just do analog; although, TiVo was a leading edge tech company in that period so hopefully they built in a digital tuner before digital broadcasting was required.

After connecting up the Series 3, letting it run several system updates (it is eleven years old) and running the now familiar station scan on the antenna it worked!   It worked really well.  Signals are crisp.  Recordings work as expected.

The prototype totally works; although, there are some limitations.  The Series 3 can’t be seen by our mainline Roamio box, so I can’t access OTA recordings from my family room with this box.  A further limitation is the Series 3 can’t stream to anything.  It can transfer recordings to/from my other TiVos, so this is a viable backup system for the next time Verizon gets into a squabble with a broadcaster.  But, it’s not a viable replacement for my current system.

What I need is a modern TiVo that can record OTA signals.  Fortunately there are two boxes that could fit the bill.  The recently discontinued Roamio OTA (about $470 from Amazon) and the recently announced Bolt OTA ($500).  The Bolt OTA has everything I’d want on a replacement TiVo for my main system, though with a respectable price tag.

Posted by BarrettJG at 7:36 AM