What could possible be wrong with a network installed and dare I say "operated" by a lawyer?  Of course, the answer is just about anything.  When we saw the house, I was stunned to see the "wiring closet," a section of unfinished space where a spaghetti mess of UTP and COAX were tied, sometimes literally in knots with some terminated into female connectors, some with male connectors, some stripped back several inches, untrimmed ends pocking into other cables, and some undecipherable labels on a few cables. 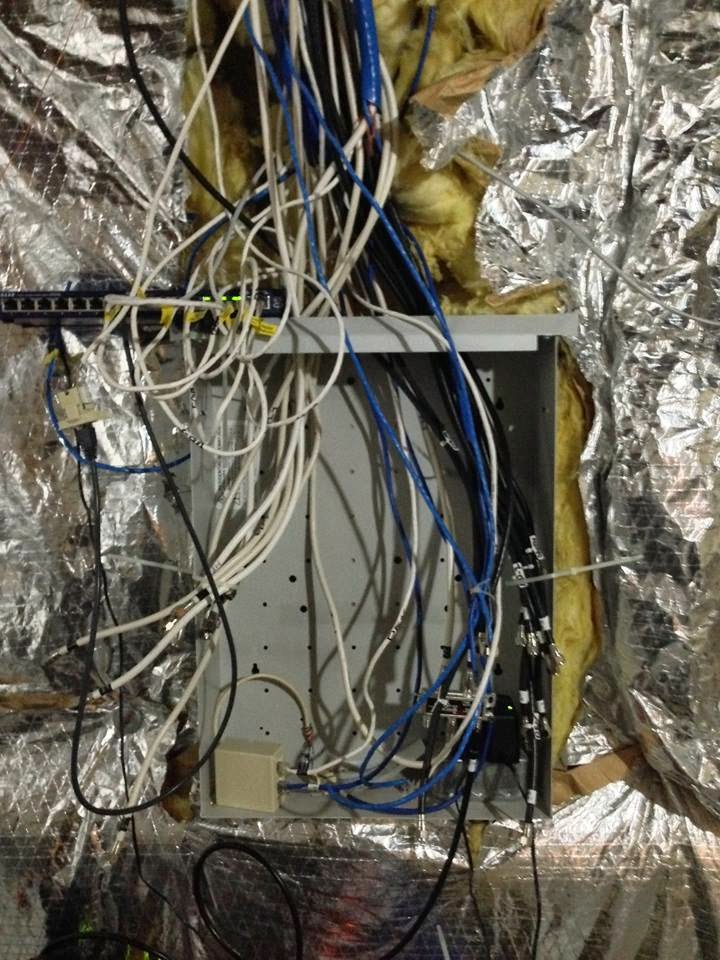 My first step was to try to segregate the UTP (network and phone) cables from the multitude of COAX and trace them.  As each was traced it was labeled with a neat color coded tape label so I could skip the tracing next time.  When that was said and done, I was down to only about a dozen mystery cables.  The network cables were plugged into a switch that I literally zip tied on top of the box.  The coax cables went into a couple of bundles.

The result, definitely not pretty was an organized mess, something I could work to improve and I thought something that might help performance of the network.

It was not long till my son tried to use his computer to play WoW and immediately discovered that the network was horrible, with disconnects and latency galore.  He fixed it by going to a wireless connection, bypassing some of the mess that is our wired network and let me know about it.  I thought I was retired, but I seem to have inherited another broken network.

I knew the terminations on some, many, most of the connections were poor at best, so I started triage on the most important connections.  The signal from Verizon comes into the house and up to the office router, an Airport Extreme, and then back to the basement to connect my 16 port switch.  That path is used by every bit coming or going from the house, so I took a careful look at the wiring in the office.

Needless to say, I didn't like what I saw.  Two jacks hanging on their wires, one of them with an excessive amount of unsheathed wire. 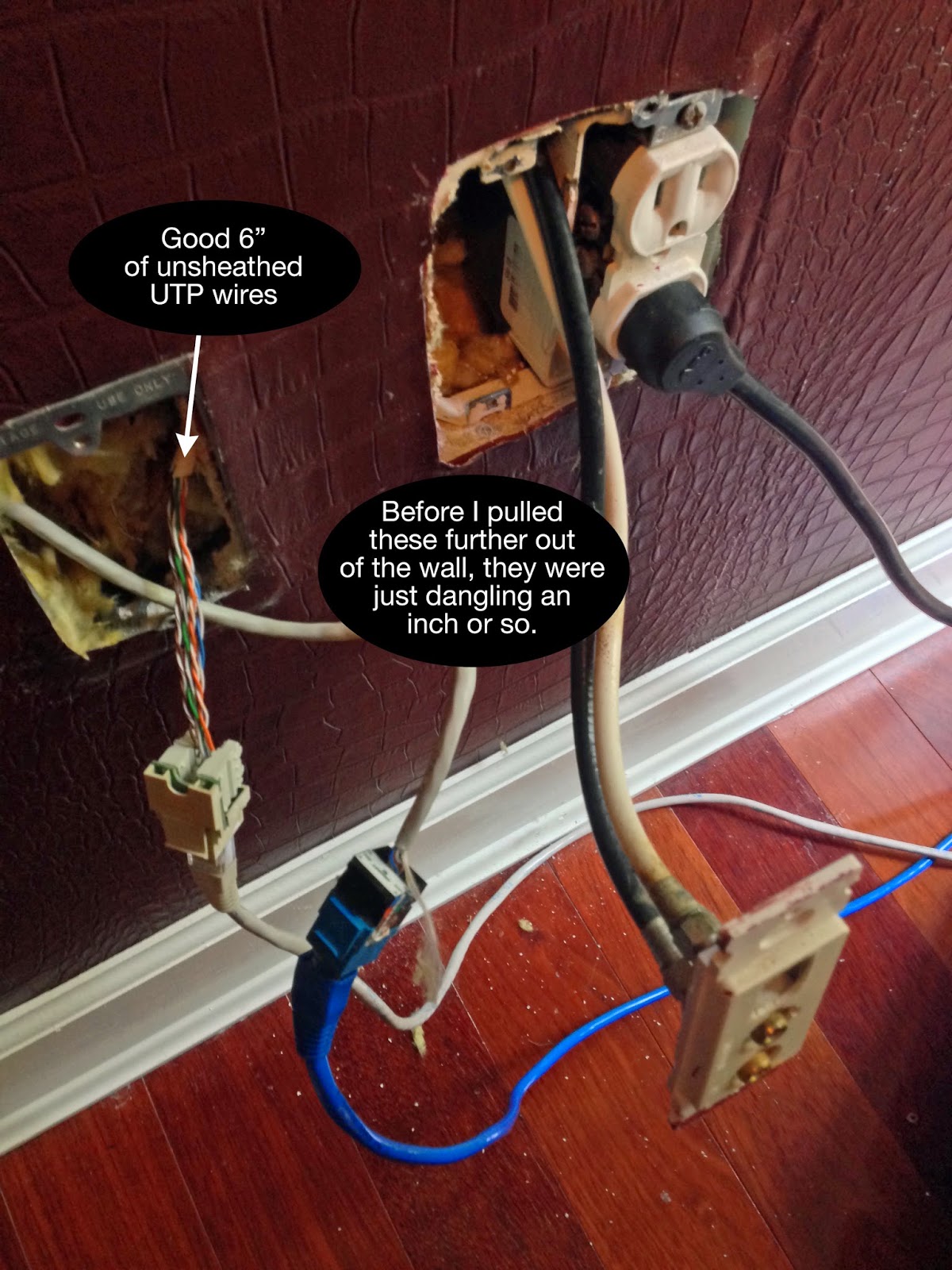 Looking at them more closely, even the good connector was pretty bad.  All eight wires had been pushed into their slots, presumably by hand as they were loose and not trimmed.  I punched them down and trimmed them.  The connector that has the long run of unscathed cable I cut back a distance, tossed the unrated terminator and used a new Cat5e connector. 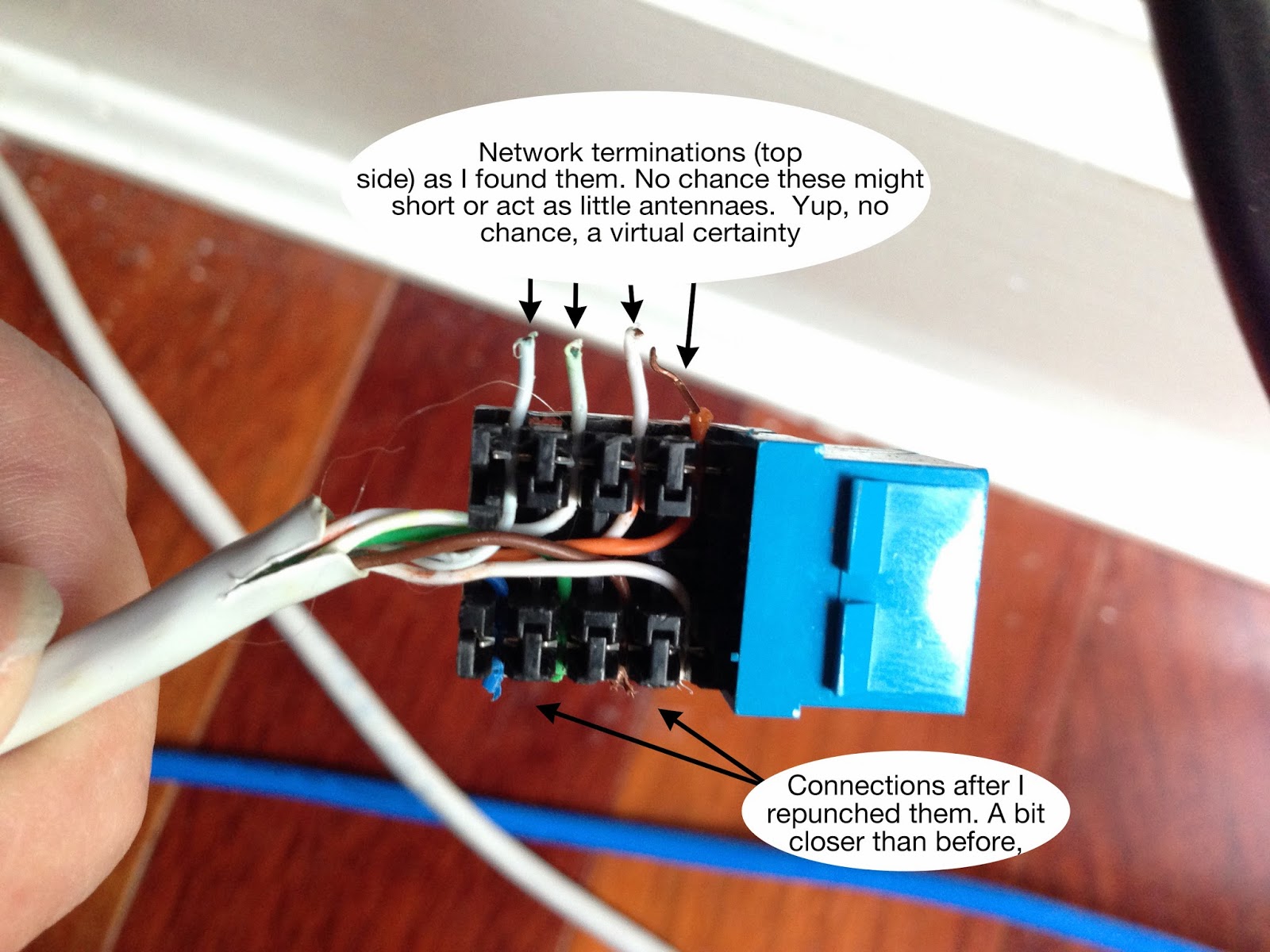 In a word, very good, ok, that was two words, but you get the idea I expect.  After these changes the network is running much smoother.  Not as good as it likely should but much better.  I still have the disaster in the basement that needs to be cleaned up and no doubt a mess in every wall jack in the house, but it is much, much improved.

Posted by BarrettJG at 9:04 AM